One of the more interesting aspects of life in the retirement community is the presence of romance. Who would have thought it? But the fact of so many widows, widowers, and other singles living in close proximity means we all should have thought it.

Romance happens among the aging population. It certainly happens around here.

One thing I’ve noticed is that the protagonists of these love stories try to keep it secret for as long as they can. But people here are very interested. They notice things, like how some have a habit of sitting together in the dining room. They notice little things. And they talk.

A few years back a horticultural expert gave a lecture on old growth forests in Oregon. I found fascinating the information about the underground fungal network that connects the trees and allows them to actually communicate. That image grew into a metaphor and inspired the following poem:

The trees talk.
Leaves seem to whisper and
below the understory
swimming from root to root
a vast fungal network
channels messages of danger,
drought, and radical change.
Between species
across the miles
the unspoken word goes forth.

Don’t think you can keep it secret.
This particular forest has many leaves
all fluttering in the least rumored breeze.
And deep underground
the mushrooms are on the move.

One of the most interesting stories is that of Sam and Therese, both in their 80s. For the past several years it became evident to all how comforting and encouraging their companionship was to each other. In 2020, in the middle of the pandemic, they decided to get married. As large gatherings were prohibited at the time, Sam and Therese, accompanied by only a handful of family and friends, married under the gazebo in the community garden. Some of us watched from the upstairs windows that faced the garden. It was a simple Quaker wedding.

Sam is a life-long Quaker; Therese a life-long Catholic. Love does not take that into account. Yet it does matter. Since the wedding, Therese had expressed a desire to have a Catholic ceremony to bless their union.

The outworking of that desire proved complicated, involving legalities and procedural negotiations. Hal and I, along with a few other residents of our community, worked with Sam and Therese to help make possible her desire. We finally found a young priest in a neighboring town who was willing to work with us. All of this took place over a period of several months.

Finally, in the early part of this year, 2022, a small group gathered with Sam and Therese in a lovely old Catholic church. With all the ritual and symbolism the Catholic Church does so well, the priest validated and blessed the marriage. In many ways, the ceremony was like a Protestant wedding, with readings from Scripture, a homily from the priest, and the exchanged vows.

The ritual addressed the union of a Catholic with a Protestant. At one point mid-service, the priest, reading from his book, asked Sam if he was willing to raise the children of their union in the Catholic faith. He then looked up from his book and chuckled. We all chuckled. He then briefly explained that ritual process requires him to ask that question, no matter the ages of the couple. Sam good-naturedly promised to raise their babies Catholic.

After the service and the presentation of the couple, we congratulated them, all of us happy and laughing. Therese reached out to touch the priest’s arm, smiled at him, and said, “You know, you’re just a baby.” More chuckles.

The presence of romance among the aging is one of the things that adds life and color to this forest. It’s always a bit surprising. But the joy is contagious. All the trees seem to be laughing.

[Sam and Therese gave enthusiastic permission for posting this story.] 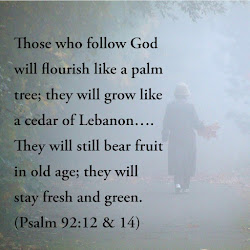